Radiator mounted in top of the case, with the included fans set with the default quiet profile.

After having the Nepton 240M installed in my system for a while now, to allow the thermal paste to cure, and I have been monitoring how it performs.

I have to say that I have been impressed so far, and if you look at the graph below you can see that even when in a small system the temperatures at idle are nice and low. 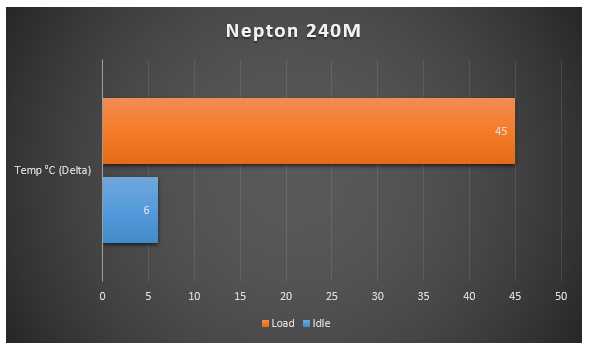 Going further into the acoustics, upon initial installation I disabled the thermal control of the CPU fan header, which the Nepton uses for the pump. Then after rebooting, I noticed a slight whirr from the pump itself, which quickly disappeared after a few minutes.

The two Cooler Master fans tat come with the Nepton 240M come with a splitter so they can be connected to one fan header and thus be at near the same speed and allow for easier control of the noise overall. Despite the addition of these two fans the overall noise output barely went above a whirr.