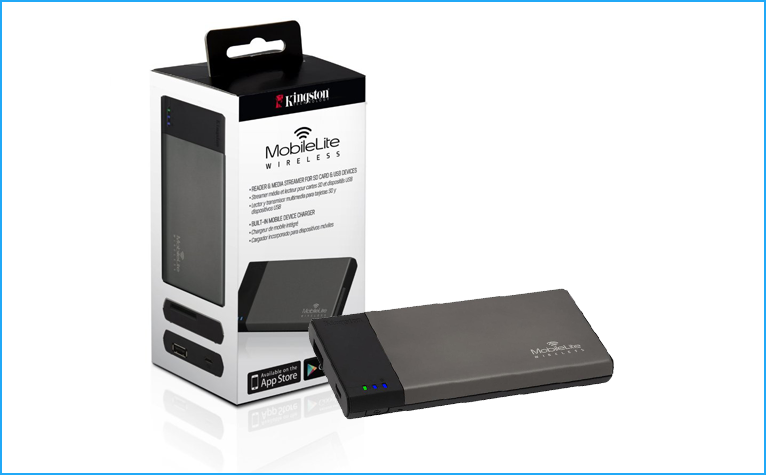 It’s a trend currently that everything is going wireless; from the more common devices like wireless keyboard bundles. Manufacturers have recently been adding the functionality to storage devices such as external hard drives, memory cards and the like. Today at Dave Plays we are going to be looking at one such device; the Kingston MobileLite wireless reader.

When the Kingston MobileLite landed on my desk, I was bit perplexed as to what it was, but once I found out a bit about the device and actually tested it; it seemed silly to me why no-one had done something similar. Put simply the Kingston MobileLite is a device that allows you to share or stream files and media from both SD cards and USB Flash drives easily to your portable devices (up to three devices at once). Whilst also doubling (tripling maybe?) as an emergency backup battery for your portable device as well (at a cost of reducing the length of time you can then use the MobileLite).

I was shocked at the small size of the box, standing no taller or wider than some mice we sell, it seemed a diminutive box for the product that was encased within, but anyway onto the review.

The outside of the box I have to say looks very bland, having a small picture of the MobileLite on the front whilst listing the basic features of the device. The box also details contact information for the technical support should you have any issues in setting up or using the device; a plus for this is they actually list a geographical number rather than an 0870 or similar number.

Opening up the box, you get to the actual MobileLite device. Which is snugly fit inside a tray that slides out of the main box; this then has two tabs which fold up and allow you to remove the contents of the tray easily. The reader is supplied in its own bubble bag for extra protection, beneath it in the tray are a USB cable (for charging), a getting started guide, and finally a microSD card adapter (a nice addition). 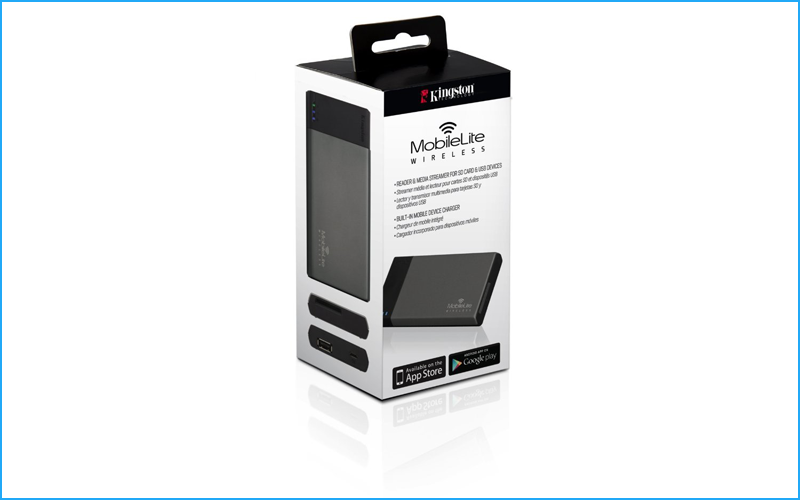 After removing the MobileLite from its little home, I was instantly struck by how well it felt put together; with it certainly having a nice heft to it. The plastic used for the casing felt very nice and is a nice matte black and gunmetal grey colour. Which means it looks fairly understated.

On the MobileLite we have a micro-USB port on one side, which is used to charge it, that side also has the full-size USB connector with the SD card slot on the opposite side. On the face, there are three status lights which tell you what is going on with the device, from left to right you have the battery light, the wireless light, and the internet light. With the battery light being able to change colour so you can see when it is below 50% and 25% full. Then below the lights we have the power switch which turns it on and off…simple really. 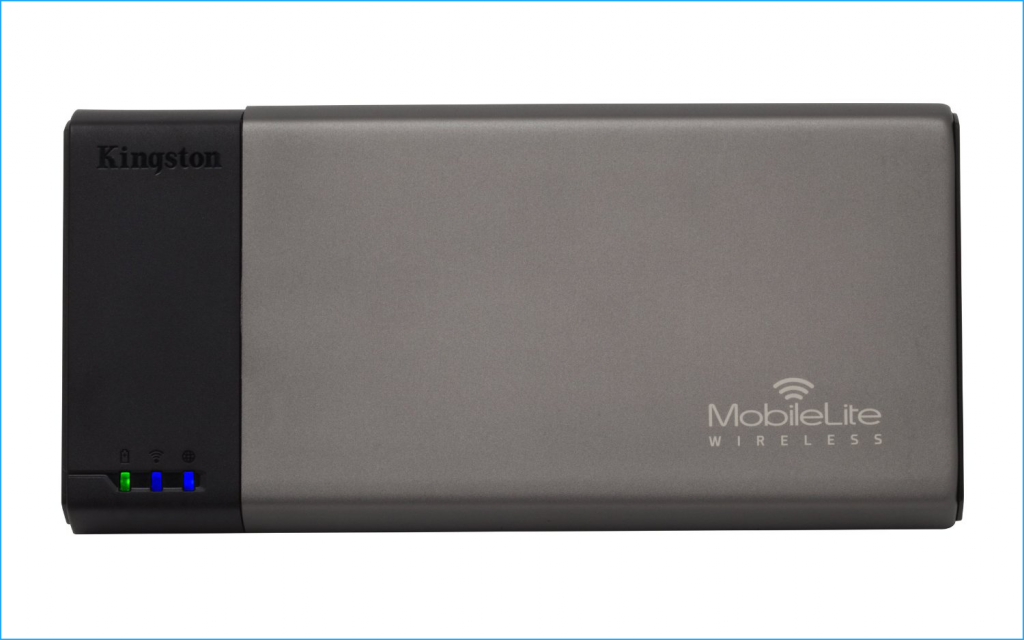 Kingston MobileLite from the top

Side Images of the Kingston MobileLite

To begin using the MobileLite means downloading a program from your devices respective app store, So Google Play for Android devices and the Apple App store for your iOS based devices, unfortunately no app as yet is available for Windows based phones. (Sorry Mikey!)

Once the app is installed you will need to turn the MobileLite on then connect to the device using wireless, in the same way you would if you were connecting to the internet itself (but selecting the Kingston device rather than your router). Once connected and running the app you can add your memory cards or USB drives and the device will show them accordingly. The MobileLite has a nice little trick up its sleeve as well, as you can then connect it to another wireless network meaning you don’t have to sacrifice being able to get onto the internet whilst using it.

To use the device as a portable charger it is a case of removing anything plugged in switching the MobileLite off, then plugging your devices USB charging cable into the USB port and pressing the power button shortly for a second or so, however in this mode you cannot use the device for storage sharing. 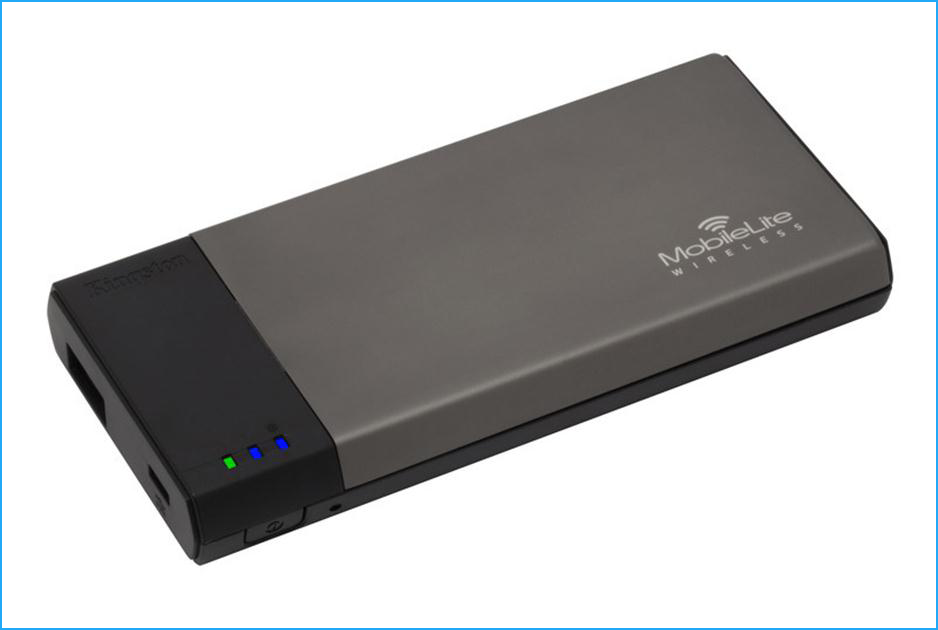 To test we are going to look at how well files stream when the device is being used as well as the range that is achievable from the device whilst still being able to connect and share files.

So we got our three devices (the limit for connections), two Android devices and one Apple and hooked up a pen drive full of various media and image files from our tech-site YouTube page and set about streaming and sharing. The MobileLite was kept in one central part of our large building as we moved about. Whilst not too interested in overall transfer speeds (we believe that any normal person would use other methods to back up large amounts of data) the main question we felt was about what we could stream and if the device could do it well to all three devices at the same time.

For what it was put through the MobileLite handled everything as well as could be, being able to manage the requirements of the three devices connected without having any issues. As the MobileLite loads video files in external players, the only limits we found were in our own devices not having the correct codecs to play some of the files that were placed on the drive, though this was rectified by installing a player with the required codecs.

For audio files the MobileLite appears to use a built in player, so you don’t have to leave the app whilst listening, its is a basic player with standard controls for skipping tracks as well as a shuffle and repeat option.

To just show what it was put through, one device also sat transferring files to and from the device; whilst the other two sat streaming large video files (2GB) this went on for several hours, during which there were absolutely no issues with the quality of the stream or any connection issues.

The wireless as you could expect for the device being so small as well as battery powered meant that range was fairly limited; we managed about 15~ Metres  from the device before it started dropping out, but as the design of the device is for it to be portable this is a moot point, as you can quite simply take it with you.

The apps themselves are both very polished and easy to navigate, with both apps having a simple uncluttered interface with buttons that allow you to filter the file list to specific categories, such as just video files or just audio files, which is a nice touch.

If you tap the highlighted dots in the top right it will bring up a list where you can see and edit the settings, such as the wireless point you want to connect to. You can also change the default name the MobileLite uses as its own access point name.

We did make use of the MobileLite as a charger, as you can see in the images my battery did get quite low after using it for most of the day, once plugged in, it charged fine and didn’t have any issues. Kingston say the MobileLite will last for around 5 hours and when we went to test the charge function it was nearing the end of that.

Kingston MobileLite from the top

The Kingston MobileLite is a smart and simple to use device which allows you to easily backup files from your phone when a PC might not be available, whilst giving potential access to vast storage spaces for those newer devices that are not nice enough to come with expandable storage. The Kingston MobileLite is an extremely nice device, you certainly get what you pay for, and what you get is an extremely flexible device that can cater to your own storage needs. The secondary function as a portable charger is a nice touch to a device that is already very useful; especially with todays devices getting more and more power hungry.

In short, the Kingston MobileLite is a very nice device, two thumbs up.

You can find more information about this device over at http://www.kingston.com/en/wireless/wireless_readers