These adapters were touted for their ability to create an independent WiFi hotspot, and to their credit it out of the box they did just that. Once synced a devolo network appeared on my scans and with the details I had, was connected to nice and easily. The tests below were performed when the TPLink adapters were removed from the network, this way the lower speeds they offer could not impact the tests.

I performed some file transfer speed tests across a number of devices from my Qnap NAS (dual gigabit LAN). I was quite impressed to see that with gigabit cabling throughout, an average of around 65Mbps during these transfers was maintained. (transferring files across the network is something I seldom do but the 65Mbps speeds were more than enough for HD content streaming)

Wireless performance was slightly lower, coming in at 59Mbps but this still bettered my routers WiFi by some way.

I used the devolo adapters briefly as a replacement for my normal LAN cable, and during my gaming sessions I have to say that I didn’t notice too much of a difference in terms of ping and overall responsiveness. With the difference in network speed becoming more clear when I was downloading files outright from the web, where the drop from 100Mbps+ to ~65Mbps was a bit more noticeable on larger files.

As devolo have rated the adapters at a fairly decent throughput for both wired and wireless transmissions, it would seem the wiring in my house did not want to be an effective conduit for these adapters.

Of course this is only representative of the wiring in my household and your speeds may vary, especially depending on the distance between the adapters themselves. 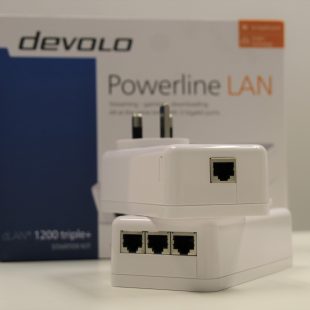 I can't believe it's been nearly two years since I last looked at a product from devolo. With the devolo dLAN 1200+ Wi-Fi being reviewed favourably back in April 2016. Today I am taking a look at a product from the same dLAN 1200 range, no Wi-Fi this time but three gigabit ports for all your...