There are probably not many of you that know about Squirrel King, but I recently found it in a list of unlicensed game roms on my PSP so I thought why not and decided to have a go at playing something that had not been given the Sega seal of approval and I expect to do a few more of these as I find the games.

Video game ROMS are serious business, so I will not go into the legalities, but unlicensed games are already in a bit of a grey area already and I do not think Gamtec, the makers of Squirrel King will be too interested if I use them as a starting point. So with that out of the way Squirrel King itself.

Squirrel King is an unlicensed game from the aforementioned Gamtec, which as Wikipedia describe it “appears to be loosely based upon Capcom’s Chip ‘n Dale: Rescue Rangers for the NES” Now unfortunately I have not had the ability to play Rescue Rangers but have watched a few playthroughs thanks to Awesome Games Done Quick and it is remarkably similar.

In the game you have the choice to choose either of the aforementioned chipmunks. As Chip or Dale you have the fairly standard abilities to lift and throw boxes at enemies, weirdly you also have the ability to shoot fireballs – this power up is also shown on screen by way of a Hulk fist for some reason – to get these power ups you have to lift and destroy boxes, doing so occasionally reveal power ups but seemingly whenever you need them they are never there. Luckily in the game you generally have lots of health, as you can take five hits per life and lives are generally easy to come by in game. 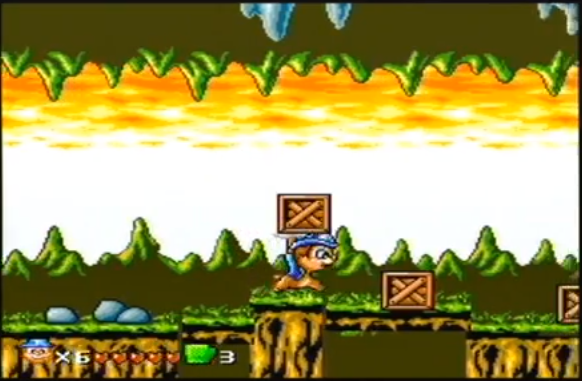 Squirrel King comprises seven levels and is actually quite well made, at the end of each level there is the usual end level boss. Bosses in this game are the usual level of weird for a 90’s side scrolling game, and include a Rabbit that rides a floor buffer, what appears to be an Ostrich on a single wheeled motorbike, and a Rhino that sits in a tank. As you progress through the levels, you eventually end up at the main bosses warehouse, a boss called Barnett who is a rather angry Elephant. 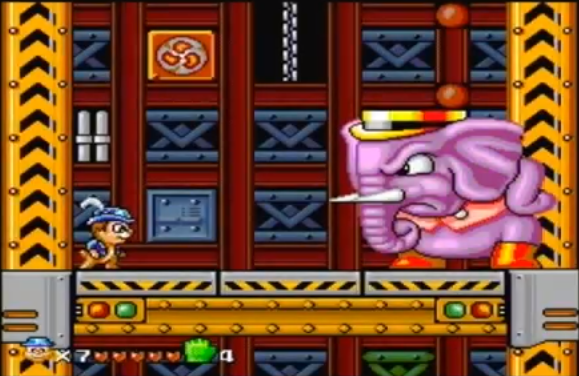 Each of the bosses have the same mechanic to beating them, you need to wait for the required item to drop, such as a box, bomb or mallet then throw it at the boss, or the easier method try to store fireballs and cheatsydoodle your way by throwing them repeatedly at the boss, I always prefer the latter. 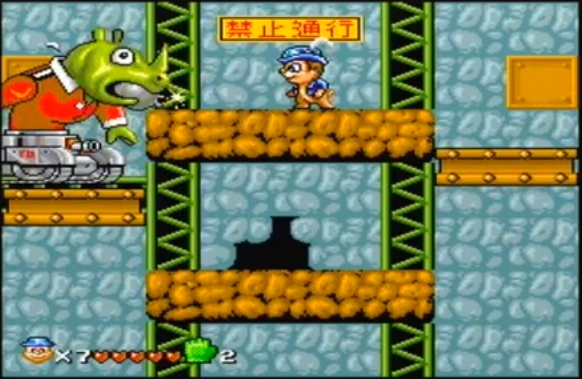 The levels whilst mostly forgettable are sometimes pretty awkward, at certain points in levels the game stops scrolling to the right and due to the level design it isn’t clear that what you are safe to jump on, although it is generally upwards that you need to go. Although going upwards can be quite dangerous because if you fall the screen does not scroll back down, resulting in an insta-death. The level names are also not necessarily perfect English which adds perfectly to the unlicensed feel of the game. 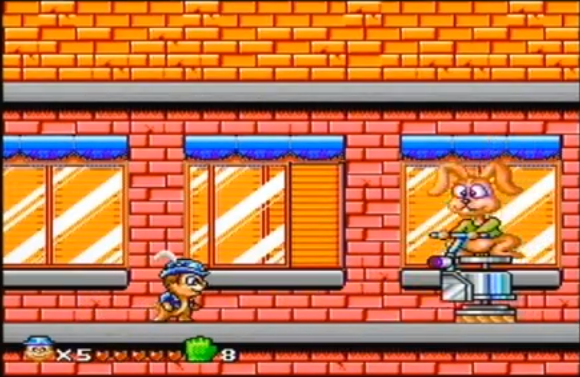 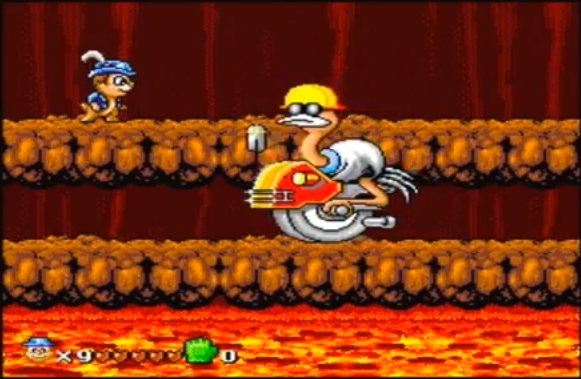 Ostritch on a Bike in a hard hat – Squirrel King

With any game that is unlicensed you always expect there to be some kind of problems, but in Squirrel King they were surprisingly few, and the actual animation and controls were surprisingly tight, the actual in game sprites for the characters as well are also well drawn.

After completing Squirrel King, I was actually shocked to see that this game is readily purchasable online, for around $15 and I can say that come pay day I will most likely be picking up a copy. I really enjoyed Squirrel King, despite its flaws, and what my may think about the game it was a fun game to play and my first of hopefully many completed games in 2014.