To continue with our reviews we are going to look at another CM Storm product. Namely the CM Storm Reaper, which is part of their Aluminium Gaming Series of peripherals. CM Storm is the gaming off shoot of Cooler Master and has built up a reputation for reasonably priced but very high quality gaming peripherals with their products developed using research gained from partnerships with gaming clans such as TCM gaming.

CM Storm’s mission is “Arming the Gaming Revolution” and they have certainly been active over the past few years releasing, lots of different gaming peripherals such as the CM Storm Trigger gaming keyboard and the CM Storm Inferno mouse, which the Reaper seems to take some styling cues from.

The CM Storm is certainly impressively specified; it has an adjustable DPI, ranging from 200DPI to a massive 8200DPI, which is powered by an Avago 9800 Gaming sensor. Each button is also fully customisable using the downloadable software from CM Storm, you can store three separate profiles onto the mouse as well, in the same software you can also dim the LEDs on the mouse or make them pulse, or just simply turn them off. The mouse comes with a 1.8M braided cable which terminates with a gold plated USB connector.

The Box and the product

The box the Reaper comes in is very nice and understated, following on similarly to the Pitch earphones with silver engraved text on the matte finish box. The front of the box has a large picture of the Reaper, with some nice abstract purple flourishes set behind it; the rear has a list of the features and a key showing them on the mouse. On the side of Reapers box; it has “Gaming Mouse – Reaper” in a multitude of languages, again much like the Pitch from an earlier review. The opposite side has locations of Cooler Master HQ’s around the world just in case you wanted to know. 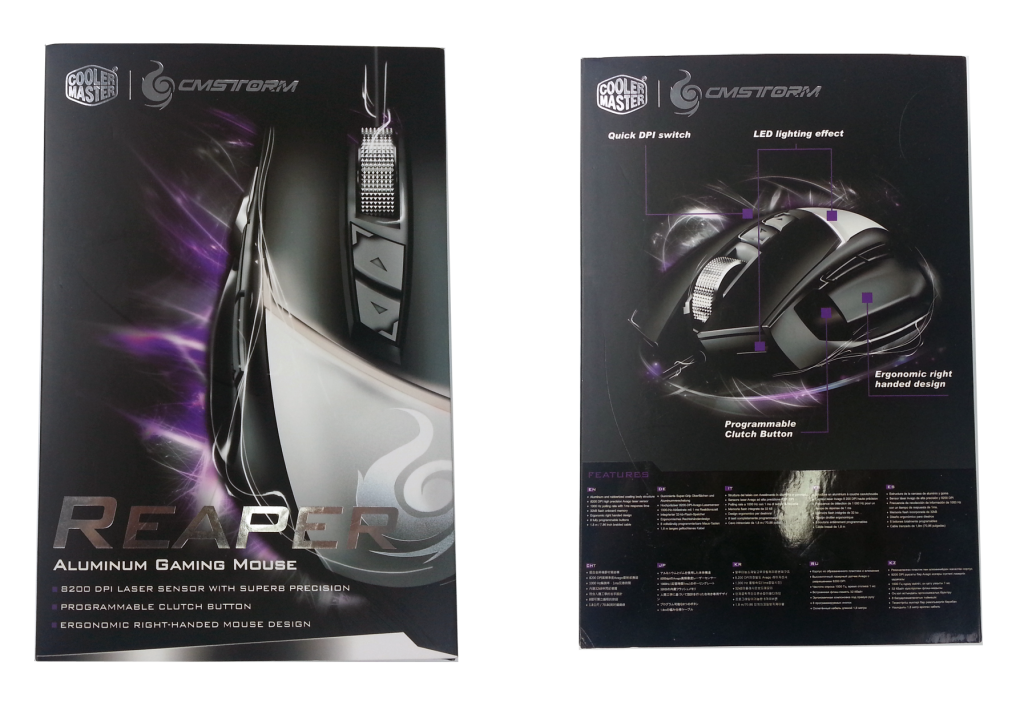 Front and back of the Reaper Box

After sliding the box out of the sleeve, you finally get to see the mouse itself and apart from a plastic wallet containing the warranty info and the mouse itself there is nothing else included. 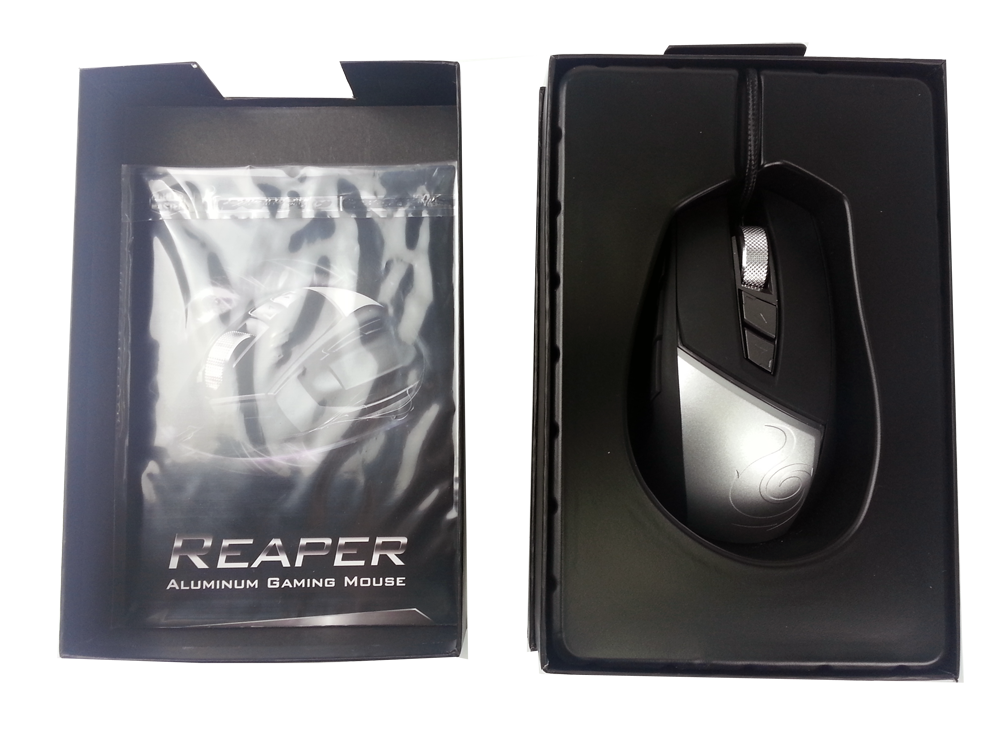 Inside the box of the CM Storm Reaper

Upon first feel; Physically the Reaper feels solid, which is probably due to the solid aluminium parts used at the rear as well as the scroll wheel, and though it eschews changeable weights like some of its competitors, the Reaper has a nice mass which is balanced across the mouse as well as a nice profile.

The software that is provided by CM Storm for the Reaper is very nicely laid out, the main screen allows you to change the button mapping, and you can program each key to do whatever you want. 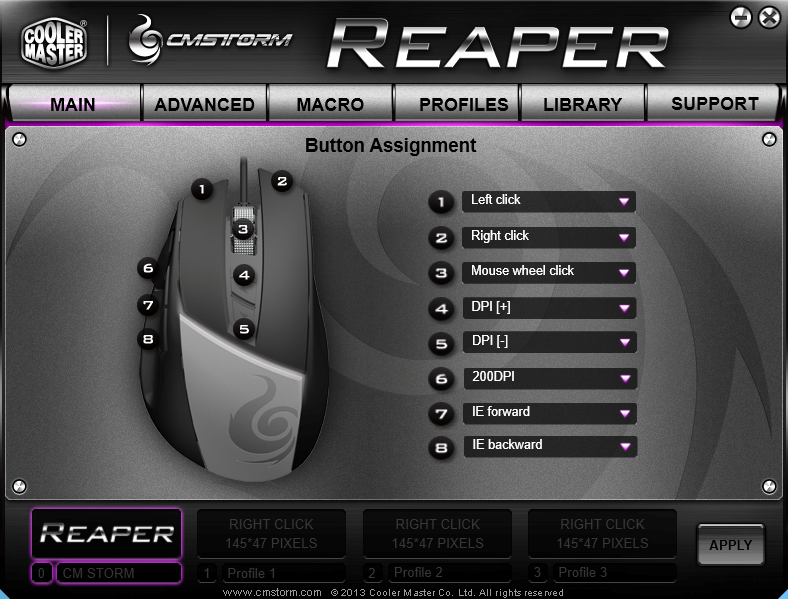 The main page of the CM Storm Reaper software

Under the advanced software settings is where the software allows you to make changes to the 4 DPI levels, available in steps from 200 DPI all the way to 8200, you can also change the X,Y DPI levels independently, whilst also changing the polling rate for each DPI profile. 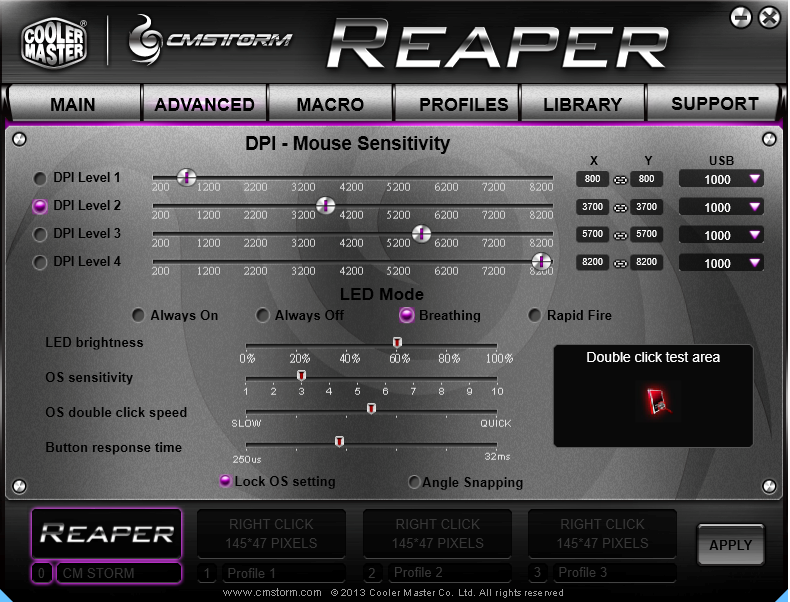 Inside the CM Storm Reapers Software

In this same window you can change the features for the mouse under windows, including the default OS sensitivity and OS double click speed, CM Storm also provide a nice window to test the double click speed and make sure it is to your liking. The advanced window allows you to also control the LED mode, with the brightness able to be changed in 20% steps from 0% as well as the actual mode of the LED; you can have it turned off, Breathing or on Rapid Fire mode (which flashes the LEDs as you click the mouse).

The other screens, allow you to set up macros for the mouse as well as saving different profiles, which can then be saved and loaded as needed. In the Library section, any macros that you save will be listed, again allowing you to load them if needed.

To test, I am of course going to play a few games as well as putting it to use as a general mouse for home/work use, as the majority of mice will not always be used to play games so they need to offer as good usability under normal situations as well. Once again the trusty Logitech MX 518 (my work mouse) went into the drawer for a while and I plugged in the CM Storm Reaper.

The Reaper is an ergonomic design for right handed mouse users, but more importantly the Reaper designed for people who use the “palm grip”, which is good for me, as I do.

I started by playing Battlefield 3, which I have to admit I play poorly, I am more of a Counter Strike guy, but this is not a game we currently have on our test system. After playing for quite a while however the mouse stayed comfortable to use and thanks to the aluminium back plate it was still quite cool, which meant that I didn’t have sweaty hands. During the game I changed through the multiple DPI settings, the mouse was perfect throughout.

I moved onto other games after Battlefield 3 but mainly stuck to the well-travelled FPS and third person shooter games, as these games offered plenty of chances to test the clutch button, which by default when pressed drops the sensitivity to 200DPI allowing for more precise aiming, as well as the general tracking of the mouse,

In normal use the mouse also worked perfectly well, and the mapped buttons worked well as back and forward buttons whilst web browsing and thanks to the software these could be triggered to load specific apps from the list of options, run macro’s which I had fun in playing with, or simply work as multimedia keys allowing you to skip tracks at the touch of a button.

The LEDs on the mouse are unobtrusive even on the brightest setting and only began to become a slight issue to me when the rapid fire option was chosen, especially if you are burst firing.

The CM Storm Reaper mouse is a very comfortable gaming mouse for people who have a palm style grip and is also reasonably sized. In testing the Reaper performed flawlessly, the macro and button mapping functions of the included software were a welcome addition as both were easy to set up and easy to use. Whilst the price of the Reaper is higher than some of its competitors, the additional quality and use of metal parts in the design more than makes up for it – a lot of work appears to have gone getting this mouse just right.

In addition, the styling choices of the Reaper means that compared to other gaming mice it looks slightly out of place, different, but not in a bad way. It looks understated, with its sleek matte finish and white LED a welcome break from the growing trend of bright colours and even brighter designs.