My first test for the drive was to use it for a while, I don’t like running tests on new drives so I put an installation of Windows 10 onto the drive then fill the remainder, then wipe it. After a few days to allow for garbage collection etc I performed the tests below.

Crystal Disk Mark was the first, a piece of freeware that performs sequential read and write tests of hard drives. 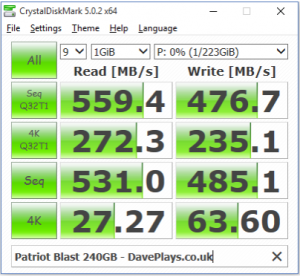 After running through the tests, you can see that the sequential speeds are nice and fast. The speeds are not far from the spec sheet, the writes being the larger variance compared to the specifications.

AS-SSD was up next with a similar barrage of tests performed. 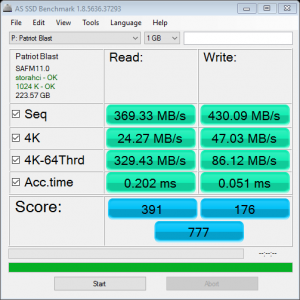 The results were a bit of a shock to me, they were a vast difference to the Crystal Disk results.

After these tests, PCMark 8’s storage tests were next on the agenda as these aim to give a more representative look at real life performance by using traces that are recorded from real applications and games than relying on straight throughput.

PC Mark 8 expands on the previous iterations available tests, providing a more thorough bombardment on the drive, including application loading tests, which involve replicating a working environment to see how fast test applications such as Office software loads. 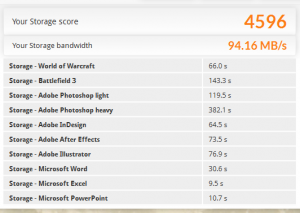 The results of this test were okay, the storage bandwidth was a bit lower than I would have expected but the actual access times were more than satisfactory.

I was impressed with the overall results shown by the Patriot Blast. It’s the first Patriot drive I have been lucky enough to get my hands on and to be honest I like it a lot. It’s certainly no performance king, but it has a lot of performance under the hood.

Even after my bombardment of data to condition the drive, the Patriot was stable in its results from the tests.  I foresee a long life from the Patriot based on the results here. With Patriot giving it a 3-year warranty it would seem they also feel the same way.

You get a lot of features under the case with the Patriot Blast as well, including the regular Trim and NCQ (Native Command Queueing), but you also get advanced garbage collection, end-to-end data path protection, advanced wear-levelling, smart ECC, smart refresh and guaranteed flush technology. Which will all help the drive to maintain its performance throughout its lifetime. Unfortunately the same cannot be said for the included accessories which are non-existent, I would have liked some basic accessories in the box.

At the end of it all, If you are still running a stock hard drive, you should be looking to upgrade/replace now and the Patriot Blast 240GB would be a solid choice if you want to do so.

Overall I award it the DavePlays Silver award. 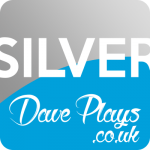 If you want to help DavePlays (we only have minimal adverts) click the referral link below, for any purchase I get a small kickback that will go into running the site.